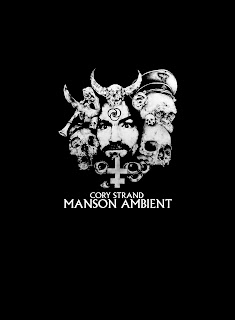 When I was 16 years old my dad let me take the car into Minneapolis and go wherever I wanted to.  Having just read Helter Skelter for the first time, I found myself fascinated by the fact that Manson had been so closely intertwined with the musical scene of his era.  On a snowy March night I drove the car deeper into Minneapolis than I had ever been and landed at Oarfolkjokeopus Records, where I was told they had a couple Manson records on the shelf.  I came home with "Live at San Quentin" and "LIE: The Love and Terror Cult" and proceeded to blow my teenage mind by listening to the ragged and hallucinogenic blood poetry conjured up by Manson's delusional and unhinged consciousness.  I felt like I was in the presence of something weird and otherworldly, something legitimately dark.  The only other time I've felt it was the first time I heard Burzum, as though I was entwined in the grasp of a transmission from the void of the heart.
Fitting, then, that "Manson Ambient" is some of the most unsettling and difficult work I've created.  I didn't set out to make these pieces as such; initially this record was to be something lovely, almost slight in its melancholia.  I wanted to make beauty out of terror, and with this I could not.  What emerged out of the audial ooze was a nebulous goop of foreboding, something born out of the source material's immutable dementia.
This shit is scary.

Packaged in a DVD case in a limited edition of 5 hand-numbered copies.  $18 ppd. in the  United States, $30 rest of world.