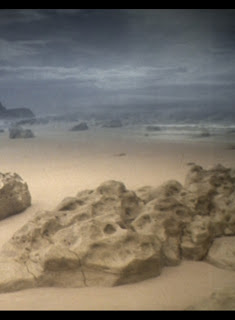 Densely layered and meticulously crafted, Clive Henry's work is a study in pure intensity both psychic and emotional.  The sounds are complex, intricately arranged and oftentimes nakedly raw, a scathing interpretation of HNW aesthetics filtered through the lens of heady literature and film.  "XVIII - Der Siebente Kontinent" reaches far into the crumbling psyche of modernity and immerses itself deep in the giant blank of dispassion, retreating ever further into the endless and deepening gray of purgatory.  Everything is worthless, an illusion, a construction, a fallacy.  The realization breeds alongside a growing resentment and bitterness, poisonous and rotting from the depths of the subconscious.  The future is drowning in an ocean of repressed nothingness.  Vapidity is a window to forever.
Altar Of Waste is honored to release this work from one of extreme sound's most innovative composers.  Based on Michael Haneke's film, "Der siebente Kontinent" is a harrowing, haunting, unnerving, and ultimately brutal exploration of contemporary malaise.  On a personal note, this is one of the most challenging and intense recordings I've ever heard.  Total immersion in the outer mysteries.  Packaged in a DVD case in a limited edition of 20 hand-numbered copies.  $10 ppd. in the United States, $18 rest of world.