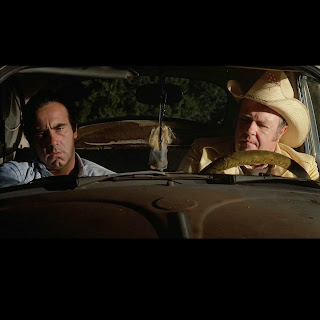 My rework of Carter Burwell's very brief score for Joel and Ethan Coen's masterful neo noir Blood Simple attempts to get at the rotted heart of the film, with a massive gulf of empty ambient spread across two discs that burrows deep into the existentialist quandaries of the work.  There is no violence here, not even an outburst-only the hollow tomb of contemplation that the film forces you into, a grey and purgatorial place where right and wrong are inexorably intertwined with action and consequence.  There are no punishments worse than the condemning dialogues we hold with ourselves.  The Coens know this and have manufactured a stunning filmography where philosophy holds a distant and removed court over the paltry lives and actions of men.  This record is a theoretical field recording from within those imagined halls of justice.  $8 ppd. in the United States, $20 rest of world.

ORDER HERE: www.altarofwasterecords.storenvy.com
Posted by Author at 9:40 AM