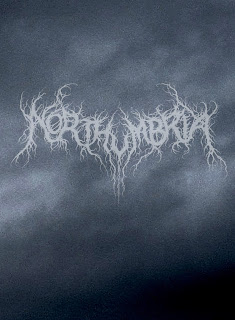 This one has been in the works for a long time.  When I first heard Northumbria's debut full-length on TQA records I was immediately awestruck and very deeply moved.  A truly engulfing roar of beautiful, droning sludge distortion and slow-motion textures screaming with yearning, the band sounded like nothing less than ancient and eternal mountains ripping themselves from the soil and throwing themselves into the cold and indifferent ocean.  The majesty of the natural exalted over the falsity of the modern.  The record was (and is) powerful for me, an epic work of pure and true sound borne from the same place as Earth 2 and l'ile re-sonante .  I wrote to the band immediately after starting Altar Of Waste and we agreed to work on a release, something the band promised would be truly special.
Finally unveiled, "All Days Begin As Night" is a unique and expansive release as well as being a masterful continuation of the work begun on the self-titled debut.  Northumbria offer up the gorgeous and haunting title track and then give it over to five distinct entities to remix and reassemble, essentially mapping out an exhaustive array of diverse but united sounds.  From Theologian's nightmarish and stately expanse of cathedral-like emptiness, to Famine's icily melodic bastardization of IDM, to Witxes' fuzzy and glistening burble drones, to Aidan Baker's gorgeous and crackling minimalism, to the black glassy droning pool of my own epic remix, "All Days Begin As Night" is a transfixing journey into the fertile realms of reinterpretation, an album seemingly borne for Altar Of Waste.
I am really honored the band gave this to me, along with an immense amount of creative freedom and an unwavering belief in me and the label.  This is a very special release for AOW!
Packaged in a DVD case with all photography by me, in a limited edition of 50 hand-numbered copies.  $10 ppd. in the United States, $22 rest of world.