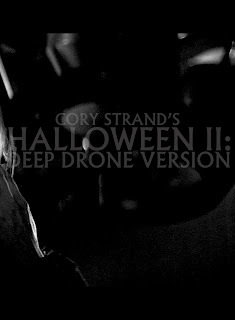 An alternate version or companion volume to my upcoming Occult Supremacy release ("Halloween II: A Reinterpretation," most likely coming in 2014), "Halloween II: Deep Drone Version" is exactly what the title implies: a hyper-minimalistic reinterpretation of John Carpenter and Alan Howarth's masterful score for the sequel to Carpenter's landmark slasher.  Halloween II as a film was far more violent and brutal than its predecessor, forsaking all of the daytime menace and tension depicted in the first for something more visceral and bloody-minded, a veritable slaughter that left few characters alive and more or less set the standard for further characterizations of Michael Myers within the Halloween series.  In creating this specific version I have sought to upend that intensity and transmute it into a sort of quiet and prolonged dread, the eye of a storm of utterly inhuman and hellish violence.  May it haunt your dreams.  Happy Halloween!
Packaged in a DVD case in a limited edition of 5 hand-numbered copies.  $20 ppd. in the United States, $32 rest of world.