CORY STRAND "DAY OF THE DEAD: A REINTERPRETATION" 6CDr (AOW 149) 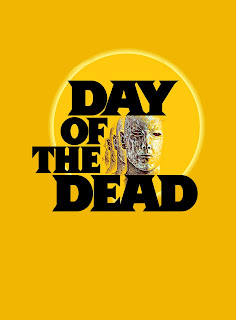 Many people cite Dawn Of The Dead as their favorite film in George Romero's trilogy, but for me Day Of The Dead perfectly captures the sick and hateful darkness that cloaks the collective human heart.  Through its intense focus on a small group of survivors holed up together and losing all hope against the endless zombie hordes, descending into anger, frustration, and insane fear born from an inability to comprehend the nihilistic absurdity of their situation, Day Of The Dead better illustrates society's ultimate terminus point in the face of annihilation.  In working with John Harrison's score for the film, I have attempted to create a stifling audio environment that is as relentless and unforgiving as it is layered and disorienting.  Forsaking violence in favor of an incredibly dark ambient approach (sans for one small explosion of pure hellish destruction/consumption towards the end), this album will press down on you over and over again, an avalanche of glacial drone that becomes more and more oppressive as it marches on, unstoppable and hungry.  I highly urge you to heed the suggestion in the liner notes and listen to this loudly, with headphones.  This album was designed with isolation in mind.
Packaged in a twin volume DVD case in a limited edition of 5 hand-numbered copies.  $30 ppd. in the United States, $42 rest of world.