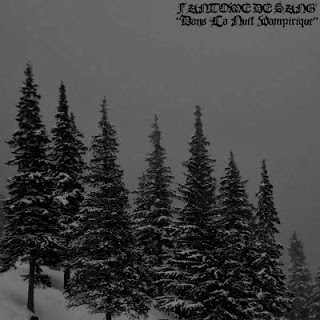 More severe and melancholic blackened noise aristocracy from my LLN-influenced project Fantome De Sang.  Moving away from the massive constructs of the debut "Maladif Lune," "Dans La Nuit Vampirique" focuses the aesthetics into something more digestible but no less eviscerating.  Fantome De Sang is a project about minimalism, violence, elegance, arrogance, and nostalgic approximation, psychedelic and raw noise as filtered through the wintry lens of classic French black metal.  I have tried to attain a certain aura of the primitive on this recording, hopefully evoking frigid nights amongst the forests, with a waxy moon weeping down from above.  Howls come from the forests but also from the heart.
$5 ppd. in the United States, $17 rest of world.