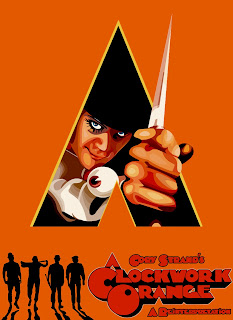 A reissue of one of my long out of print (and earliest) soundtrack reworks, Stanley Kubrick's A Clockwork Orange, featuring an masterful synthesizer score by Wendy Carlos.  This has been one of my most-requested titles; this reissue features all new artwork and additional HNW "Totality" recording of the film's audio track (so even if you have the original pressing, this new version may be of interest to you.)  Here's the original write-up:

"My second exploration of the soundtrack works of Wendy Carlos focuses on her superlative score to Kubrick's Clockwork Orange.  Carlos' compositions for the film were rooted in aristocratic classical masterpieces but also displayed her trademark darkness and sense of sonic disassociation, resulting in a perfect amalgamation of the highbrow and the severely fucked-up that fit Kubrick's vision to a tee.  If anyone could make Beethoven sound violent and menacing, it was Wendy Carlos.
I've attempted to tap into that sense of foreboding and violence with my work here.  Again, while I in no way make the statement that these pieces hold a candle to Carlos' originals, I think collectively these compositions provide a pretty excellent overview of my aesthetic in this medium; from deep bass drones to crawling walls of sludge to all-out HNW fracturing, it's all here, in copious amounts.  If nothing else, "Clockwork Orange: A Reinterpretation" serves as an overview of my myriad solo projects and a truly exhaustive listening experience.  At their best, I think they conjure up the wavering reality suggested by the film and serve as a devoted tribute to one of electronic music's finest innovators.
On a personal note, this is a favorite amongst all my releases."

It's still a fave of mine.  My work doesn't sound like this anymore; this was an older methodology possessed of a certain joyful naivete.  Packaged in a DVD case and released in a limited edition of 5 hand-numbered copies.  $35 ppd. in the United States, $48 rest of world.

ORDER HERE: www.altarofwasterecords.storenvy.com
Posted by Author at 9:26 AM