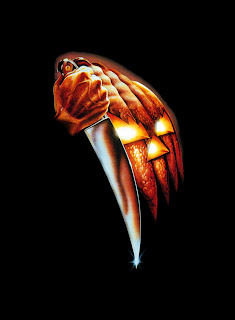 A massively expanded reissue of one of my most-request titles, "Halloween: A Reinterpretation."  Originally released in February of 2013, this one disappeared pretty quickly and was reviewed very favorably by Musique Machine.  This new version includes a wealth of extras; in addition to the original 3 CD ambient/drone album, the reissue contains an all-new 3 CD HNW rework of the original album, my 2014 release "Halloween: Revisited" (also long out of print) and two all-new long-form drone and HNW compositions.  I wanted to make this reissue special, and I feel this set achieves that goal.  Here's the original write-up:

"What I like best about John Carpenter's seminal Halloween is his masterful use of non-horror elements and atmospherics to create an aura of almost suffocating dread and impending violence.  The film is virtually unmatched in its ability to coax horror out of the daylight, the oblique and vague infinity of night absolutely trumped by the sheer and ghastly presence of massive stretches of empty space and the gnawing horror of a lone car slowly passing through the streets.  The true terror of Halloween for me lies not in the grisly murders Michael Myers perpetrates in Haddonfield but instead in the relentless stalking he subjects Laurie to in the opening half of the picture.  His obsessive and haunting pursuit almost defines Carpenter's film and imbues it with a sense of hopelessness and nihilism not oft found in American cinema since.
In my approach to the soundtrack I have foregone any display of violence or severity, attempting to hone in on Carpenter and Howarth's desolate evocations of senseless and bloody-minded obstinance.  These are the emptiest spaces of "Halloween," given leave to walk the night and weave themselves into the fabrics of their physical presences.  Dead eyes stare back, hollow and full of the yawning bleak."

Packaged in three separate triple-DVD cases, each with their own artwork.  Released in a limited edition of 5 hand-numbered copies.  $65 ppd. in the United States, $78 rest of world.

ORDER HERE: www.altarofwasterecords.storenvy.com
Posted by Author at 9:36 AM