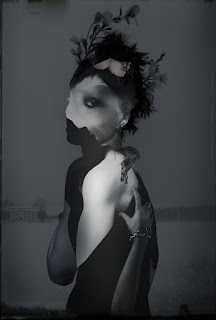 An epic rework of Trent Reznor and Atticus Ross's masterful soundscape for David Fincher's superlative cinematic adaptation of Stieg Larson's The Girl With The Dragon Tattoo.  Though I find the Swedish television version to be equally masterful, I prefer Fincher's vision, as he directs Rooney Mara in such a way that her portrayal of Lisbeth is more interesting and multifaceted: Fincher's Lisbeth is tough and vulnerable, her emotions locked deeply away but not gone entirely (Mara's Lisbeth feels so much more real compared to Noomi Rapace's, whose Lisbeth can be a bit wooden at times.)  And of course, Reznor and Ross's score is just a killer piece of music.
In working with the score, I've tried not to dilute it too much.  The score is suffused with a distanced grandeur and dread; my rework capitalizes on that and takes it to a more extreme and sustained place.  At times ominous, at other times achingly beautiful, but always dense and layered and full of endless cycling sounds.
As said, this set is epic; I haven't created something this substantial in a long while, and I am very proud of the results.  The rework is composed of thirteen discs comprising the reworked score, three discs of long-form ambient/drone pieces constructed from various elements of the score, three discs of HNW pieces crafted from elements of the score, a single disc featuring a lengthy improvised synthesizer composition by me inspired by the film, and two DVD-Rs: one containing an HNW "Totality" reworking of the film's audio track, the other a "Ghost Ambient" version of the same.  Each disc is packaged in its own DVD case with its own artwork, utilizing images and ephemera from the film.  It's a thing of beauty when you see it all layed out together!
Released in a limited edition of 5 hand-numbered copies.  $200 ppd. in the United States, $213 rest of world.