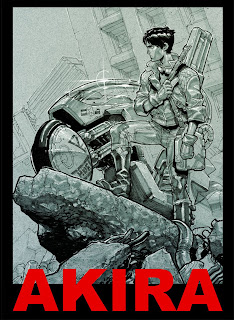 Rework of Geinoh Yamashiguro's masterful score for the legendary film Akira.  This is one of my girlfriend Gina's favorite film scores (we listen to it a lot) and the film itself is rightly regarded as a classic that transcends any sort of categorisation or genre pigeonholing.  In approaching the score I've sought to maintain the depth of Yahashiguro's compositions and make them more suffocating, more oppressive, more dense.  The first 10 discs are huge, monumental slabs of thick, despairing drone veering towards the ANW end of the spectrum, with the 11th disc featuring shorter harsh noise versions of the pieces.  All in all, nearly 12 hours of music.
Packaged in 11 separate DVD cases, each with their own artwork utilizing imagery from and ephemera associated with the film.  This is a really lovely looking set, with amazing, super-colorful and psychedelic imagery.  It's quite beautiful.
Released in a limited edition of 5 hand-numbered copies.  $125 ppd. in the United States, $141 rest of world.

ORDER HERE: www.altarofwasterecords.storenvy.com
Posted by Author at 6:16 AM