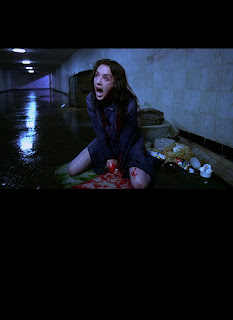 Andrzej Zulawski's 1981 Possession is a gorgeously insane excursion into the craziest recess of psychosexual supernatural horror, an amazingly acted tour de force for Isabelle Adjani, and one of very few films that truly deserves to be called "fucked up."  The first time I saw it i was utterly blown away, simply unable to believe what i had just witnessed.  I don't want to say too much more than that for fear of ruining it for anyone who hasn't seen it (if you haven't, it's absolutely worth your time!), but i'll just say that since that initial viewing it's become a favorite of mine, a disturbing and beautifully sickening film that belongs alongside some of the other crowning achievements of body horror, like Friedkin's The Exorcist and Cronenberg's The Brood.
The film's score, by Andrzej Korzynski, is equally as stunning, a collection of anxiety-ridden queasy orchestral drones and screeches that reference both Bernard Herrmann's sense of melodrama and Ennio Morricone's drug-addled psychedelic phantasmagoria of sound.
This is the "deluxe" edition of my rework of the score, and it's beautifully over the top in terms of presentation.  16 discs, with each disc including both the noise and the ambient versions of my sixteen pieces crafted from the score, plus a noise "Totality" recording created from the film's entire audio track (just over two hours long, and not available in either of the stand-alone versions.)
Packaged in 17 separate DVD cases, each with their own full colour artwork utilizing my favorite images from and ephemera associated with the film.  All of the screen grabs were done by me personally, pulled from the blu ray release of the film published by MondoVision.  I wanted to really do this film and its score justice.
Released in a limited edition of 5 hand-numbered copies.  $150 ppd. in the United States, $166 rest of world.
ORDER HERE: www.altarofwasterecords.storenvy.com
Posted by Author at 4:48 AM