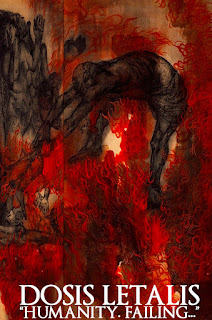 Angry, sorrowful, and cacophonous HNW terror from Dosis Letalis, here exploring the suffering, despair, and fallout resulting from a world obsessed with military violence, a world where bombs fall like rain and leave nothing but devastation and emptiness in their wake.  Listening to this tape brings to mind destroyed landscapes, shadows of human beings burned into the land, scattered bone and flesh and the remnants of lives that once were.
The two pieces here remind me very much of Napalm Death's "Scum" in spirit-an outburst of rage at the sickening values that have come to dominate the world, values that crush people beneath their collective heel and regard profit as the highest aspiration.  This is shredding, scathing HNW that feels like you're in the middle of a firestorm.
Released as a C30, blood/fire red tinted cassettes, with beautiful, richly coloured and detailed artwork.  Released in an edition of 20 hand-numbered copies.  $8 ppd. in the United States, $24 rest of world (i know, it's awful, i'm sorry-wish it were different.)

ORDER HERE: www.altarofwasterecords.storenvy.com
Posted by Author at 6:35 AM