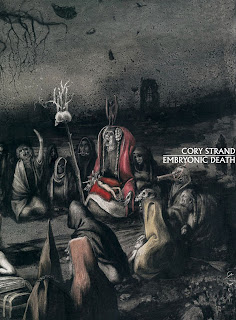 The third and final of my tributes to Jeff Hanneman, "Embryonic Death" utilizes the track "Silent Scream" (one of my very favorite Slayer songs) and manipulates it in three vastly different ways, creating a shimmering aura of translucent ambience giving way to the near silent spectre of death winds and finally collapsing into a  bloody mortar shell of rotting guitar feedback transformed into a towering wall of filth, volume, and disgust.  A journey to the beyond and a self evisceration of the psyche, a testament to Slayer's awesome and consuming power, and especially to Hanneman's keen sense of harmonic dissonance and discordant tonalities.  As usual, this record comes with a super secret bonus CD of the masters at the height of their powers, reigning in blood circa '92.
Packaged in a DVD case in a limited edition of 5 hand-numbered copies.  $13 ppd. in the United States, $25 rest of world.