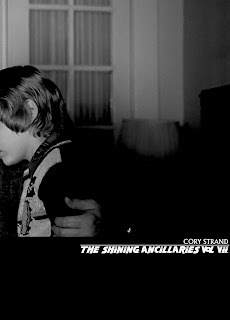 The seventh volume in a series of recordings utilizing Wendy Carlos' unused compositions for Stanley Kubrick's The Shining.  I've done a lot of work with this soundtrack in the past, and this series represents a deeper exploration of Carlos' original vision for the film score, a bizarre parade of tonal environments and shrieking ghostly ululations that for whatever reason did not fit Kubrick's vision.  The music showcased on these volumes is material that would not necessarily work as albums proper-they are individual manipulations and constructions intended to highlight specific compositions as opposed to the thematic whole of an album.  As such, they are glimpses of records that might have been, or perhaps are in an alternate realm.
"Volume VII" is an exercise in drone horror, as eerie bleats of discordance and tonal impurity give way to crumbling avalanches of deep, engulfing, nightmarish washes of the great blankness.  Everything is sick inside; everything is rotting away and becoming poison.  Murder looms on the horizon.
Packaged in a DVD case in a limited edition of 5 hand-numbered copies.  $10 ppd. in the United States, $22 rest of world.

ORDER HERE: www.altarofwasterecords.storenvy.com
Posted by Author at 6:14 AM