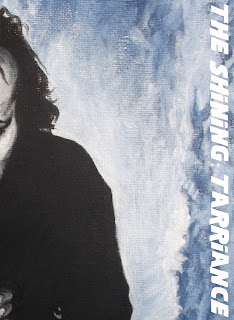 All new proper album of my reinterpretations of Wendy Carlos' unused soundtrack pieces from Kubrick's The Shining, continuing my explorations of the film's hidden recesses and power through sound.  "The Shining: Tarriance" focuses mostly on the spectral powers of the Overlook itself, an attempt to sonically map the tendrils of the hotel's supernatural reaches into the physical.  The resultant sounds are sonorous and unsettling, thick and immersive bass textures sitting alongside washed out cries and dissonant echoes from the unconscious.  More about the descent into madness than the violence spawned from the descent, "The Shining: Tarriance" is a lengthy journey through some extremely dark spaces, where eroticism and frustration begin to bloom into the rancid flowers of blood and sacrifice.  I never get tired of working with this material.
Packaged in a DVD case in a limited edition of 10 hand-numbered copies.  $15 ppd. in the United States, $27 rest of world.

ORDER HERE: www.altarofwasterecords.storenvy.com
Posted by Author at 6:37 AM