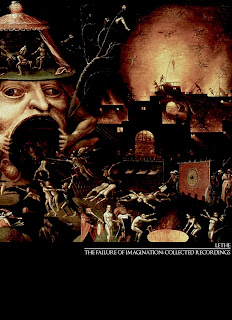 The first release in a compilation series documenting the early work of Lethe, "The Failure of Imagination" brings together a wealth of material previously only available digitally.  This collection assembles works touching on myriad styles, from all out HNW experimentation to buzzing electrodrone, from sludged out metal posturing and severe noise rock to hypermelodic gaussian blurs, from vacant declarations of yearning to brain-numbing krautrock soundtrack derivations.  The intent of my ongoing musical project becomes more obscure and more defined simultaneously, a trip into the ether and a whisp of ideas once considered.  A massive set in every way, with liner notes detailing the origins of each track by yours truly.  It's fantastic to finally be able to release these recordings in a physical format, and I hope you enjoy them.
Packaged in a DVD case in a limited edition of 9 hand-numbered copies.  $18 ppd. in the United States, $30 rest of world.

ORDER HERE: www.altarofwasterecords.storenvy.com
Posted by Author at 10:52 AM