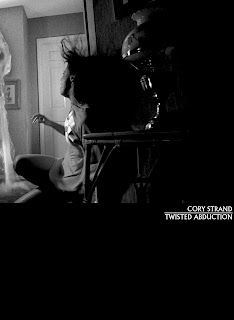 Massively elongated versions of one of the pieces found on my upcoming release for Occult Supremacy, "Poltergeist: A Reinterpretation."  Obviously drawn from Jerry Goldsmith's bombastic score for the film, "Twisted Abduction" explores both the dread, unease and growing horror found throughout Tobe Hooper's masterpiece as well as evokes the true and consuming terror presented at the film's apex, where the realm of the dead assert itself upon that of the living in a show of vengeance and disgust.  Disc one is a drone piece of tremendous depth and somnambulist synthesizer texture while disc two takes the same material and blows it well beyond the pale with an avalanche of bass heavy feedback and destructionist wall sculptures.  Terror and anger united in a devastating expanse.  They're here.
Packaged in a DVD case in a limited edition of 5 hand-numbered copies.  $15 ppd. in the United States, $27 rest of world.

ORDER HERE: www.altarofwasterecords.storenvy.com
Posted by Author at 6:22 AM