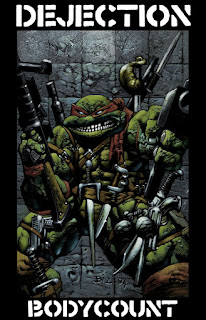 New tape from my depressive ANW/HNW/synth drone project Dejection, part of my ongoing series of recordings based on "TMNT," my favorite comic book series.  "Bodycount" is an odd one in the TMNT universe, a hyper-violent, ultra-bloody one-off story that sees Raphael and Casey Jones getting deep into guns.  It's beautifully ridiculous and the level of violence is astonishingly absurd.
The two pieces here are probably some of the most ominous Dejection recordings i've done.  It's best termed ANW, but really, the work here sounds way more like some of the extended guitar drone pieces of "Earth 2" or Sunn 0)))'s "The Grimrobe Demos."  Thick, sludgy, stagnant, deep drones to zone out to.
Released on green cassettes in a limited edition of 10 hand-numbered copies.  $8 ppd. in the United States, $24 rest of world.

ORDER HERE: www.altarofwasterecords.storenvy.com
Posted by Author at 6:14 AM