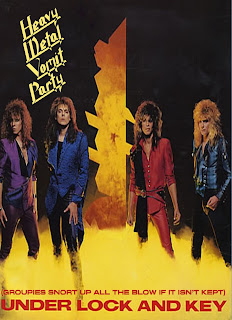 Heavy Metal Vomit Party returns to Altar Of Waste for a third outing detailing the ridiculous excesses of the 1980s hair metal lifestyle, this time laying waste to Dokken's 1985 cassette "Under Lock and Key."  As usual, HMVP absolutely obliterates the source material, turning arena rock posturing and bloated mid-80s production values into a scathing, screaming collection of eight destructive walls that numb your brain faster than a mountain of cocaine laid out on a table backstage at Hammersmith.  I love the whole aesthetic of this project, from the hilarious song titles to the don't-fuck-with-me intensity of the walls; i'm always happy to release HMVP through AOW.  Once again, Joe the Stache has reached back in time and turned excess into even more excess.  True sonic severity.
At the artist's request, and in keeping with the project's aesthetic, this release is packaged in a standard DVD case in an unnumbered edition of 10 copies.  $10 ppd. in the United States, $26 rest of world.