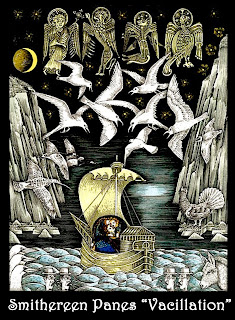 New collaborative wall project between Christopher Charles Robinson (Big Hole) and James Killick (Small Hours, Love Katy.)  For most of you those two names should be more than enough for you to just buy this outright; for anyone yet unconvinced, i'll say that these six walls will absolutely slaughter you.  Smithereen Panes sounds distinctly different from either members' primary projects; the sounds and tones here are far more abrasive, caustic, and unrelenting (which is saying a lot considering the pedigree and discographies of these two gentlemen!), a trebly swarm of intense electric buzz and crackle that eviscerates eardrums and slices deep into brain matter.  Imagine a hornet's nest being shaken and then dropped into your skull; that's the sound of this record.  A horrific assault of shredding, scathing HNW terror.  Do not miss this; you WILL regret it!
Packaged in a DVD case and released in a limited edition of 20 hand-numbered copies, with amazing psychedelic artwork hinting at some of the inspiration behind the project.  $25 ppd. in the United States, $41 rest of world.