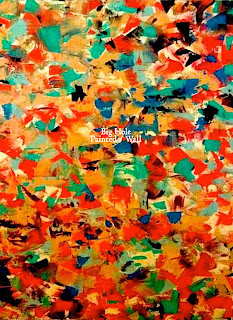 Incredibly intriguing experimental/HNW release from Big Hole, blurring the demarcations between visual and auditory art.  "Painted / Wall" is a double album recording utilizing Big Hole's field recordings of painter Chris Justice as he created a large canvas piece; those field recordings were then used to create a dense, massive, crackling wall.  The first disc is the unaltered live audio of the creation of the work as captured by Big Hole during the process, rife with all manner of obscure and interesting sounds adding up to a sort of "creation drone"; the second disc is the wall.  Big Hole is one of my favorite recent HNW projects; the work is always massive and engulfing; the intellectual aspect of this recording just makes it all the better.  A very interesting record from this project, with some beautiful, psychedelic art and sound.
Packaged in a DVD case with Justice's finished piece serving as artwork.  Released in a limited edition of 15 hand-numbered copies.  $15 ppd. in the United States, $28 rest of world.

ORDER HERE: www.altarofwasterecords.storenvy.com
Posted by Author at 5:55 AM