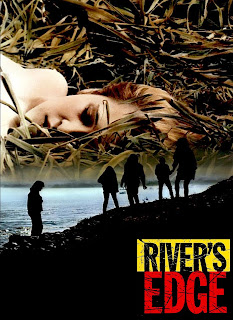 A reissue of one of my earliest soundtrack reworks, from shortly after I started the label in 2012.  This version has all new artwork and a vastly improved layout; there is also a full "Totality" rework of the film's entire audio track (new to this reissue.)  My work doesn't really sound like this anymore; my methods and techniques have changed quite a bit since this record.  Still a favorite of mine for its incredible coldness.  This record received a favorable review from Musique Machine:

The record can also be streamed over at my Bandcamp page (please note the digital version does NOT include the "Totality" rework):

And here's the original writeup:

"River's Edge" has been one of my favorite films since I saw it in a hotel room late at night on HBO almost 25 years ago.  It scared the shit out of me then.  Today, I feel there are few films that have so chillingly and accurately captured the pervasive nihilism and existential horror that permeates youth, the struggle to find meaning in the void, and the sense of desperation that drives us towards other people in hopes of making some sort of connection to combat the infinite meaninglessness.
The soundtrack to the film, made up almost entirely of classic 1980's thrash metal and hardcore punk, helped reinforce the themes of a distinct negativity at work in the universe and became as much a character as any of the teens themselves.
I have attempted to preserve the severe feelings of banality that I feel define "River's Edge" in my approach to the soundtrack.  Almost every piece here was created by manipulating the source materials in exactly the same base manner; differentiations exist in the form of tonalities and structure.  If a certain strain of HNW and ambient music is about illustrating emptiness, I feel my work here succeeds.  There is an absence in these compositions that surprises me, and I am honored to share it with those interested in sound as oblivion.

This new edition comes packaged in a DVD case in a limited edition of 5 hand-numbered copies.  $35 ppd. in the United States, $48 rest of world.