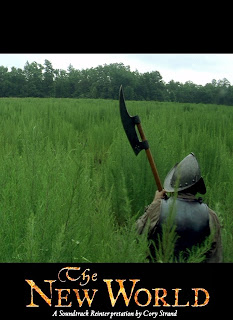 A very special release in honor of composer James Horner, who passed away earlier this week.  I started work on this almost two years ago, shortly after completing my rework of To The Wonder's score.  This is my epic rework of Horner's score for Terrence Malick's beautiful film, The New World; the score is easily my favorite of Horner's.  It seemed fitting to create something equally beautiful; my rework is a massive set of Hecker/Basinski-esque ambient disintegration.  Very, very pretty.
Packaged in 7 double DVD cases, each with their own unique artwork utilizing some of my favorite images from the film.  Released in a limited edition of 5 hand-numbered copies.  $80 ppd. in the United States, $93 rest of world.

ORDER HERE: www.altarofwasterecords.storenvy.com
Posted by Author at 7:18 AM