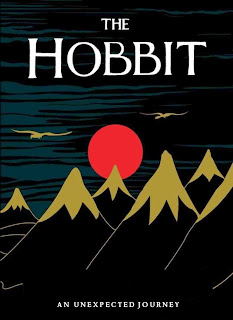 I started thinking about doing a large scale series based on Peter Jackson's The Hobbit trilogy after the 2013 release of the second film, The Desolation of Smaug.  Howard Shore's scores were so utterly and overwhelmingly magisterial and lovely that i knew I had to do something to honor both the compositional work and the filmmaking; I do not subscribe to the belief that Jackson's prequel trilogy is any less worthwhile or accomplished than his Lord of the Rings trilogy.  I find the Hobbit films to be exquisitely crafted paeans to friendship and perseverance, just as in the LOTR films; the cinematography is breathtaking and Jackson's extreme action sequences are second to none.
This release is an epic one, in every sense of the word.  Across 16 discs, I have reimagined Howard Shore's ethereal score and transformed it into an expanse of ambient dronedrift, both mournful and dark.  The rework also includes two full length "coda" compositions that bookend the rework proper, blossoming out into a more Tim Hecker-style ambient excursion.  Also included is a "Totality" rework of the extended version of the film (over three hours!) and four massive HNW pieces crafted from elements of the score.  All in all, just about 25 hours of music to carry you off into the fantasy and violence of Middle-Earth.
Packaged as a large scale set, with the albums housed in 11 double DVD cases and 1 individual DVD case (the "Totality" recording), each with their own imagery culled from the film and related ephemera.  Released in a limited edition of 5 hand-numbered copies.  $175 ppd. in the United States, $183 rest of world.