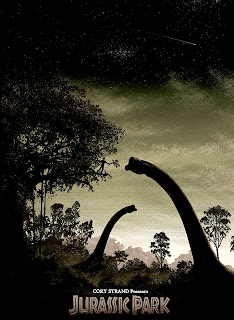 With the release of Jurassic World just a few days away, I decided to go and revisit Steven Spielberg's original film.  I have long been a fan of Jurassic Park; i have a first edition printing of Crichton's novel (which my mom gave me when I was about 11 years old) and saw the original film during its theatrical run in 1993.  I've never been terribly impressed with John Williams' score for it (a bit pompous and overbearingly bombastic for my tastes), but the main theme often gets stuck in my head.  My original plan was for this rework to have been ambient, but after some initial manipulations I decided that HNW was the way to go.  And it absolutely was!
This is some of my densest, most ferocious wallcraft.  I find it interesting (and a little amusing) that my most extreme walls to date have been for works that don't necessarily invite the treatment (my rework of Sherlock: Season One being the other example.)  This is seriously a crushing release: a manipulation of the score spread across four discs, and a "Totality" rework of the film's entire audio track on DVD-R.
Packaged as a three volume set, with each volume housed in a DVD case with their own artwork (personally, i find this to be one of my loveliest sets visually-the artwork came out beautiful on this one!).  Released in a limited edition of 5 hand-numbered copies.  $35 ppd. in the United States, $48 rest of world.

ORDER HERE: www.altarofwasterecords.storenvy.com
Posted by Author at 5:32 AM